The Holocaust must never be consigned to history

Today was the 70th anniversary of the liberation of Auschwitz.

I have been extremely gratified by the BBC’s coverage of the day’s events which has been sensitive and sincere. Today’s memorial service in Methodist Central Hall in Westminster, attended by the Prime Minister, leading politicians, the Chief Rabbi, the Prince of Wales and the Duchess of Cornwall, broadcast on BBC2, was also a profoundly moving occasion.

Yet this same BBC, on Sunday, put out a programme, The Big Questions, with the question ‘Is the time coming to lay the Holocaust to rest?’

What does this even mean? ‘Lay to rest’? Is the memory of the greatest crime in human history to be buried?

Yet, it is the implication behind this question that is disturbing. It is suggesting we have to move on, move on from something. But what is that ‘something’ that is to be, by its laying to rest, somehow reduced, diminished, waved away from our collective memory. Yeah, it happened, awful, wasn’t it. Let’s tuck it away so we don’t have to be embarrassed any longer by the stench that worries our collective guilt.

But let me take this a little further. Does the question mean, perhaps, that it is we, the Jews, that really need to GIVE it a rest; is it that we should be done whingeing and making everyone feel guilty.

And let me take it yet a little further still: does it mean the above AND quit your whining because look at what you are doing now in Palestine! Have I inferred too much?

As noted by BBC watch:

No less contentious than the wording of that tweet was the fact that the programme’s subject matter was allowed to be exploited for opportunistic promotion of political propaganda by Nira Yuval-Davis of the University of East London.

In a programme with two huge elephants in the room, namely Israel and widespread and endemic Islamic antisemitism and Holocaust denial, both were assiduously avoided until Yuval-Davis was given a platform to accuse Israel of exploiting the Holocaust to cover its crimes, and attacked Bibi Netanyahu for taking all visiting dignitaries to Yad Vashem, the Holocaust memorial Museum in Jerusalem. But, as BBC Watch points out, surely the BBC researchers would be well aware of the views of Yuval-Davis. Maybe, they would argue, her views represent the minority ‘yes’ vote for the programme’s motion.

It was, therefore, also good to hear from the (apparently) only Muslim (or maybe ex-Muslim) in the audience speak and denounce Jew-hatred and Holocaust denial in the Muslim community.

It is ironic that a programme can ask its provocative question with the clear evidence that a second Holocaust is the devout wish of so many in Europe and beyond; a time when Jews are leaving France in droves, where we have a Europe in which Jews feel increasingly threatened, where they are physically attacked and even killed.

An historian on the front row tried to make the point that too much is made of the Jewish Shoah, and that it is too prominent when there have been so many other holocausts and genocides.

I reject this suggestion which was mentioned or hinted at so frequently in the programme. No-one was brave enough to say that the Shoah is THE worst genocide, or that other events are NOT equal in human evil. David Cameron was not so coy today at the memorial service I mentioned earlier.

It is not about suffering or numbers killed, it is about the impact on the entire world, the depths of depravity, the centuries of persecution which preceded it. It is so fashionable to be PC and to find equivalence everywhere. Sorry – I just don’t buy it.

It was also about what Daniel Goldhagen called ‘Hitler’s willing executioners’ because they were by no means all German. The Nazi empire unleashed centuries of suppressed enmity in almost every country in Europe.

Most importantly, the defeat of the Nazis did not destroy antisemitism; it was merely ground into the mud of post-war Europe from which it germinated again fed by Islamic judeophobia and anti-Zionism. The holocaust denial trope of much of the Islamic world, which is a mental holocaust, provides its believers with a fig-leaf for the delusion that their hatred is somehow justified. 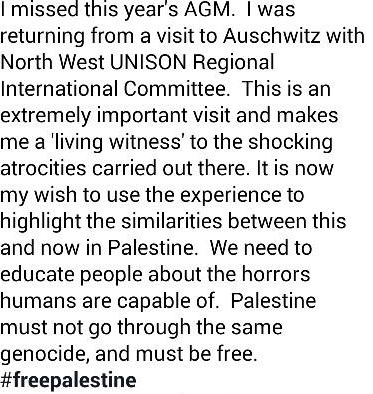 As someone pointed out, he clearly learned nothing. This speaks so eloquently of the cognitive dissonance associated with Jew-hatred and the reasons why any genocide can happen.

Finally, Auschwitz is not the Holocaust and the Holocaust is not Auschwitz. If we just concentrate on one death camp, however terrible, it risks missing the rest of the story, and it is that story which tells us why the Nazi genocide of the Jews (and others, yes, but mostly Jews) is, and will remain, the greatest crime ever committed, and those responsible for the BBC’s efforts in this programme to dumb it down into some politically-correct moral equivalence must never succeed.

Why everyone should make Auschwitz Pilgrimage

This is a transcript of my letter published today in the Manchester Jewish Telegraph:

READER Stewart Reubens wrote last week that he would never go to Poland and that visiting Israel was a better way to commemorate our survival.

He was responding to the Jewish Telegraph’s complaint that Britain was poorly represented on the March of the Living from Auschwitz to Birkenau.

While I would strongly agree that every Jew should visit Israel as often as they can, I have personal experience of the March of the Living.

I believe it is very important that our youth and, indeed, the older post-Holocaust generation should also visit Auschwitz-Birkenau.

If they can take in “the march”, so much the better.

In 1998 I flew with Manchester’s King David High School to Krakow and then went by coach to take part in the 10th anniversary of the march.

On my return I wrote in the Jewish Telegraph:

“I remember the soul-piercing sound of the shofar which began our march in Auschwitz. I remember walking with pride and defiance beneath those infamous words Arbeit Macht Frei amidst a forest of Israeli flags. I remember our young boys and girls from King David walking with thousands of young Jews and many adults like myself from all over the world in a river of blue coats which stretched in front and behind as far as the eye could see.

“I remember the clear, strong voice of Rabbi Israel Lau who told us we are an immortal people.

“I remember the words of Binyamin Netanyahu who proclaimed that we are the victors, not the vanquished and that we are invincible.

“I remember the cry in the voice of the cantor as he sang El Molei Rachamim when I thought my heart would burst.

“And I remember the Kaddish and the singing of Hatikvah in that place, in that hell.”

It isn’t about “survivor guilt”, Mr Reubens, it’s about survivor pride. We are still here, and all the Ahmadinejads, Hamases and Hezbollahs of this world cannot destroy us.

Their efforts to deny or belittle the Holocaust are best defeated by our honouring the memory of the victims; and where better than amidst the ruins of the instruments of their murder.

I returned from Poland with my spirit uplifted and with a bounce in my step. Never have I felt more Jewish than in Birkenau singing Hatikvah. Never have I been more proud to be part of the Jewish people.