Peace and love in Covent Garden 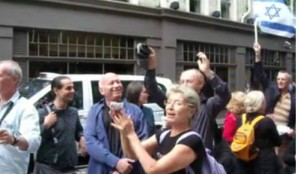 A huge hat tip to Richard Millett for his great videos on his blog here and to Daphne Anson for her analysis here.

For many months a group of protestors have encamped outside the Ahava shop in Covent garden in central London. They have broken in to this shop and stage a sit in, hung banners in the window and continue to make life for the shop, its customers and the neighbouring establishments as difficult as possible.

At the same time a counter-protest operates in close proximity.

The reason for this relentless protest is that Ahava sells cosmetics made from Dead Sea minerals. The protestors’ beef is that the Ahava operation is based in illegal occupied Palestine and the products are a symbol and rallying point for the Boycott, Divestment and Sanctions brigade.

The aforementioned Richard Millett and Daphe Anson have blogged about this in the past and it is a special subject for Richard Millett and I urge you to look at his many posts on his blog at richardmillett.wordpress.com (where the name-calling and tongue-poking continues).

The two groups are penned into areas where they do not interfere directly with passers-by. The London taxpayers have to foot the Police bill to keep the peace between the two groups. They wave flags and slogans and banners, shout abuse and counter-abuse but there is never, as far as I know, any physical violence.

It’s a very intimidating and unpleasant atmosphere. The demonstrators regularly choose the Jewish Sabbath to minimise any counter-demo, but this is not a successful tactic.

The demonstrators know full well that the Jewish New Year is a time when even non-observant Jews will be attending synagogue and will respect the sanctity of the day.

So it must have been quite an unpleasant surprise to them when, as you can see on Richard Millet’s blog, a group of a dozen Israeli tourists turned up and staged their own Israeli-style defiance.

This defiance was not a slanging match. They insulted no-one. What did they do?

Of what did they sing?

What was their message?

Just watch. Note the difference between the sour-faced haters who support the likes of Hamas and its death cult, and the joy, exuberance, humour and life-affirming singing and pride in their country exhibited by the Israelis.

The ‘activists’ had no answer except sarcasm, more slogans and even sourer faces.

Whatever your views on Israeli policy in the West Bank/Judea-Samaria, this incident, for me, was uplifting.

Because it confirmed to me the true spirit of Israelis and the Jewish people. It showed that most Israelis want peace, co-existence and life; their enemies want war, destruction and death.

So it has been for decades and so it will continue until one day the Palestinians and their supporters can find a song and a little dance, a smile and a hand of reconciliation.

In the spirit of the 1960’s, ‘peace and love’ to Israel. Peace and love to Palestinians and the entire region. Shalom v’ahava.

Over Rosh Hashanah Jews asked to be inscribed in the Book of Life; our enemies embrace the narrative of death.

Disturbing and uplifting at the same time, the videos tell in microcosm so eloquently the story of Israel and the conflict. Two little populations hemmed in by barriers, both physical and mental, gesturing across the divide. One side worn down by hatred, the other invigorated by its own vitality, exuberance and life-embracing spirit.

Thanks to Richard for posting. Whenever I feel disheartened this year, I’ll play them again.

PS support the buycott. Buy Ahava products, they are superb.

PPS Image taken from one of Richard’s videos. I’m sure he won’t mind.

Israel-Palestine, The Delegitimisation of Israel