The Cult of Death That Took Away Our Boys 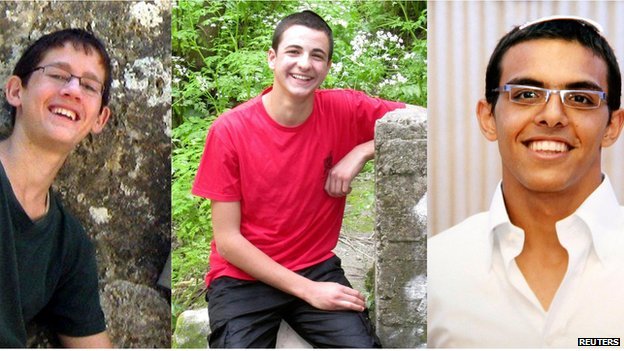 My heart is heavy. I feel loss and despair.

Today I watched the funerals of Naftali Frenkel, Gilad Sha’ar and Eyal Yifrach, three teenagers abducted and murdered on their way home from seminary two weeks ago.

As I watched the simultaneous live streaming of the three funerals, prior to burial in Modi’in, where they now lie side by side, united in death as in life, I witnessed love, warmth and compassion bursting from every fibre of their families’ being. I listened to the heart-wrenching eulogies of parents, siblings, teachers. I witnessed their families’ love of their community, the Jewish people, humanity,  G-d.

Their dignity is inspiring. We are moved to want to cross the distance that separates and to comfort and mourn with them. There is no consolation for a parent who has lost a child to brutal, meaningless, unspeakable murder.

Not so long ago my son was at a seminary nearby to theirs. Yes, not so long ago I passed the very spot from where they were abducted and murdered. It could have been my son, G-d forbid. It could have been yours. These boys ARE our sons. We are the Jewish People. We are the Jewish Family. Your son is my son and mine yours. You are my brother, sister, father, grandfather, my niece and nephew.

At the funerals there was not one single call for blood or revenge; just dignity and heartbreaking emotion. It was unbearable. I could not watch the final scenes.

Don’t tell me that we – anyone – doesn’t value the life of our own more than the other; whoever tells you that is a liar – or a saint. I have pity, yes, but not this sense of close familial ties, not this depth of grief and anger. Not this despair.

This cult of death which gloats and laughs with glee at grief and suffering, this cult with its maniacal glorification of revenge, this cult which feeds off the offal of its own vicious immorality, is simply not human; it is a travesty of thousands of years of human moral development to which Judaism and the Jewish people sit as the cornerstone and the abiding custodian.

It is, however, here to stay as it spreads across the Arab-Muslim world; a death cult devoid of pity, the absolute zero, the deep ocean trench, the nadir of nadirs of human moral worth and value. A cult that, like a tsunami of ideological delusion, scarifies the landscape of our culture, leaving a wasteland of flinty desiccation, the death of the heart, of the soul, and every last scintilla of humanness.

It is a cult that throws rocks at ambulances bearing the dead teenagers, distributes sweets rejoicing at the abduction of children (and considers them fair game), indoctrinates children to hate with a passion that is pathological, immiserates its people and wallows in the swill of its self-inflicted victimhood.

Israel and the Jewish people are not faultless, they are capable of evil, fanaticism and hatred; but this is not a pathology, it is not an essential and indivisible component of the culture, it is confronted and prosecuted, it is not nurtured and glorified.

This is the challenge of our century: how to defeat unconscionable evil, and expose its apologists.

To do so may mean our own culture is morally damaged in the fight against this scourge of our modern world, which competes with itself in plunging to new depths of depravity.

The Jewish people and the State of Israel, with all their imperfections, must be supported, critically if necessary, in this fight. It is a mistake to see it as a fight for land only, it’s far more complex. There are competing rights and claims, but interwoven with this narrative is an ever increasing, ever harsher infiltration of religio-political ideology which paints Jews as devils and untermenschen and reverses the meaning of good and evil.

Whilst the Jewish mother is consumed with loss, the Palestinian mother’s loss is somehow transformed to glorious martyrdom and the desire for more sons to sacrifice. As the Israel Matzav blog so aptly points out quoting journalist, Brett Stephens:

Here’s my question: What kind of society produces such mothers? Whence the women who cheer on their boys to blow themselves up or murder the children of their neighbors?

Well-intentioned Western liberals may prefer not to ask, because at least some of the conceivable answers may upset the comforting cliché that all human beings can relate on some level, whatever the cultural differences. Or they may accuse me of picking a few stray anecdotes and treating them as dispositive, as if I’m the only Western journalist to encounter the unsettling reality of a society sunk into a culture of hate. Or they can claim that I am ignoring the suffering of Palestinian women whose innocent children have died at Israeli hands.

But I’m not ignoring that suffering. To kill innocent people deliberately is odious, to kill them accidentally or “collaterally” is, at a minimum, tragic. I just have yet to meet the Israeli mother who wants to raise her boys to become kidnappers and murderers—and who isn’t afraid of saying as much to visiting journalists.

To hell with moral equivalences and journalistic ‘balance’, it’s time to decide which side you are on because it will sooner or later become that simple: life or death. Which path to you want humanity to follow in the decades ahead? Is it to push back and defeat, to obliterate religio-fascism, or bury yourself in a quagmire of misdirected human rights’ qualms that are only appropriate for a society and culture that has the moral capacity to produce them?

The moral chasm that separates us from our enemies is deep and wide.

On his website, former Chief Rabbi, Jonathan Sacks, had the last word on the distinction between a cult of death and those that cling to, and value life:

Never was there a more pointed contrast than, on the one hand, these young men who dedicated their lives to study and to peace, and on the other the revelation that other young men, even from Europe, have become radicalised into violence in the name of God and are now committing murder in His name. That is the difference between a culture of life and one of death, and this has become the battle of our time, not only in Israel but in Syria, in Iraq, in Nigeria and elsewhere. Whole societies are being torn to shreds by people practising violence in the name of God.