La Pasionara reborn and a Cid for our times: Pilar Rahola and José María Aznar 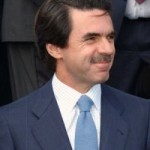 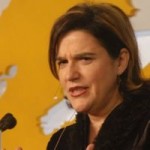 What’s happening in Spain? Two politicians, Pilar Rahola and former Prime Minister José María Aznar, have now made statements strongly supporting Israel. Maybe after the Madrid bombings they realise that Israel’s existential struggle, with all its flaws, is fundamentally just.

Pilar Rahola should not be supporting Israel. She is a far left politician; a position that normally defaults to vilification of Israel and unquestioning support of the Palestinians.

For Pilar Rahola the struggle of Israel is the struggle of the world. She has not made just one fine statement, but two, in support of Israel. Her website also highlights the middle east and anti-Semitism.

Tablet Magazine reports a translation of a conference speech against that conference’s anti-Israel stance. She points out the singling out of Israel when obnoxious regimes appear to get a free pass:

Why don’t we see demonstrations against Islamic dictatorships in London, Paris, Barcelona?

Or demonstrations against the Burmese dictatorship?

Why aren’t there demonstrations against the enslavement of millions of women who live without any legal protection?

Why aren’t there demonstrations against the use of children as human bombs where there is conflict with Islam?

Why has there been no leadership in support of the victims of Islamic dictatorship in Sudan?

Why is there never any outrage against the acts of terrorism committed against Israel?

Why is there no outcry by the European left against Islamic fanaticism?

Why don’t they defend Israel’s right to exist?

The last point is of special note. The current Israeli maritime blockade is seen as a punishment of Gazans rather than as a defence against Hamas. The occupation of the West Bank justifies past terrorism and Palestinian incitement is ignored or given lip service.

And finally, the million dollar question: Why is the left in Europe and around the world obsessed with the two most solid democracies, the United States and Israel, and not with the worst dictatorships on the planet?

To this question she has a subtle and compelling answer in another speech ‘Jews with Six Arms’ delivered at the Combating anti-Semitism conference in Spain:

The moral defeat of the left. For decades, the left raised the flag of freedom, wherever there was injustice. It was the depository of the utopic hopes of society. It was the great builder of future. Despite the murderous evil of Stalinism’s sinking the utopias, the left has preserved intact its aura of struggle, and still pretends to point out the good and the evil in the world. Even those who would never vote for leftist options, grant great prestige to leftist intellectuals, and allow them to be the ones who monopolize the concept of solidarity. As they have always done. Thus, those who struggled against Pinochet were freedom-fighters, but Castro’s victims, are expelled from the heroes’ paradise, and converted into undercover fascists.

This historic treason to freedom, is reproduced nowadays, with mathematical precision. For example, the leaders of Hezbollah are considered resistance heroes, while pacifists like Noa, the singer, are insulted in the streets of Barcelona. Today too, as yesterday, that left is hawking totalitarian ideologies, falls in love with dictators and, in its offensive against Israel, ignores the destruction of fundamental rights. It hates rabbis, but falls in love with imams; shouts against the Tsahal, but applauds Hamas’ terrorists; weeps for the Palestinian victims, but scorns the Jewish victims, and when it is touched by Palestinian children, it does it only if it can blame the Israelis. It will never denounce the culture of hatred, or its preparation for murder.

So the far left has lost the international argument. It needs to find a cause to rally round, to find a victim and demonise the ‘oppressor’. And when that ‘oppressor’ is a successful, capitalist, free society then the far left is offended and threatened. When their demon state produces world class science and research they have to boycott it. When that society is open and democratic they only point to its failures and its occupation whilst ignoring the root cause of that occupation, namely Palestinian and Arab rejectionism.

This is no better demonstrated by the concept of ‘freedom’:

And then, to the concept of freedom. In every pro Palestinian European forum I hear the left yelling with fervor: “We want freedom for the people!”

The demonisation is linguistic as well as conceptual:

When reporting about Israel the majority of journalists forget the reporter’s code of ethics. And so, any Israeli act of self-defense becomes a massacre, and any confrontation, genocide. So many stupid things have been written about Israel, that there aren’t any accusations left to level against her.

Almost a definition of demonisation.

And lurking beneath this hatred and obsessive demonisation is the old European hatred:

Just as it is impossible to completely explain the historical evil of antisemitism, it is also not possible to totally explain the present-day imbecility of anti-Israelism. Both drink from the fountain of intolerance and lie. If, also, we accept that anti-Israelism is the new form of antisemitism, we conclude that contingencies may have changed, but the deepest myths, both of the Medieval Christian antisemitism and of the modern political antisemitism, are still intact. Those myths are part of the chronicle of Israel. For example, the Medieval Jew who killed Christian children to drink their blood, connects directly with the Israeli Jew who kills Palestinian children to steal their land. Always they are innocent children and dark Jews. Similarly, the Jewish bankers who wanted to dominate the world through the European banks, according to the myth of the Protocols, connect directly with the idea that the Wall Street Jews want to dominate the World through the White House. Control of the Press, control of Finances, the Universal Conspiracy, all that which created the historical hatred against the Jews, is found today in hatred of the Israelis. In the subconscious, then, beats the western antisemite DNA…

And this finds a perfect resonance with Islamic Jew-hatred.

I urge you to read her speeches in full. She is certainly a voice in the darkness and a true latterday Pasionaria.

She is not alone.  In the Times this week former Spanish Prime Minister, José María Aznar, wrote ‘If Israel goes down, we all go down’.

In this article Aznar puts the case for Israel and succinctly states the truth about Israel now lost in worldwide hysteria and malignity:

In our dealings with Israel, we must blow away the red mists of anger that too often cloud our judgment. A reasonable and balanced approach should encapsulate the following realities: first, the state of Israel was created by a decision of the UN. Its legitimacy, therefore, should not be in question. Israel is a nation with deeply rooted democratic institutions. It is a dynamic and open society that has repeatedly excelled in culture, science and technology.

Second, owing to its roots, history, and values, Israel is a fully fledged Western nation. Indeed, it is a normal Western nation, but one confronted by abnormal circumstances.

Uniquely in the West, it is the only democracy whose very existence has been questioned since its inception. In the first instance, it was attacked by its neighbours using the conventional weapons of war. Then it faced terrorism culminating in wave after wave of suicide attacks. Now, at the behest of radical Islamists and their sympathisers, it faces a campaign of delegitimisation through international law and diplomacy.

He then explains how the Israel/Palestine issue is not just a border dispute or a legal nicety:

The real threats to regional stability, however, are to be found in the rise of a radical Islamism which sees Israel’s destruction as the fulfilment of its religious destiny and, simultaneously in the case of Iran, as an expression of its ambitions for regional hegemony. Both phenomena are threats that affect not only Israel, but also the wider West and the world at large.

… Some even act and talk as if a new understanding with the Muslim world could be achieved if only we were prepared to sacrifice the Jewish state on the altar. This would be folly.

He mourns the decline of the West’s moral backbone which it exchanges for fashionable platitudes:

The West is going through a period of confusion over the shape of the world’s future. To a great extent, this confusion is caused by a kind of masochistic self-doubt over our own identity; by the rule of political correctness; by a multiculturalism that forces us to our knees before others; and by a secularism which, irony of ironies, blinds us even when we are confronted by jihadis promoting the most fanatical incarnation of their faith. To abandon Israel to its fate, at this moment of all moments, would merely serve to illustrate how far we have sunk and how inexorable our decline now appears.

He then sets about describing his fight back against this attack on western values and democratic integrity by announcing a new Friends of Israel initiative.  I urge all of you who love freedom and righteousness to sign up. This is not about giving Israel carte blanche. Criticising Israel and its policies is everyone’s right. Willing her destruction, demonising its people and Jews generally is not acceptable. Recognising its achievements and working for a peaceful resolution of the conflict to benefit everyone in the region and making the world a safer place should be our goal. Making Israel the fount from which all evil flows can only be called one thing and we all know what that thing is.

Israel is a fundamental part of the West. The West is what it is thanks to its Judeo-Christian roots. If the Jewish element of those roots is upturned and Israel is lost, then we are lost too. Whether we like it or not, our fate is inextricably intertwined.

Anti-Zionism does not equal anti-Semitism?, Israel-Palestine, Other, The Delegitimisation of Israel