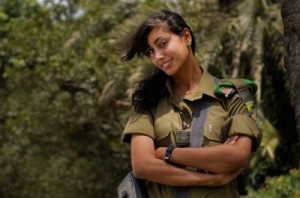 The State of Israel has begun its own blog.

It will run a ‘Faces of the IDF’ feature.

First up is Corporal Eleanor Joseph, or Elinor Yosef, a female Arab Israeli from near Haifa who is following in the boot-steps of her father. She strikes a very winsome pose on the website. But behind the obvious PR exercise of having attractive Arabs serving in the IDF, (she also happens to be Christian) lie some contradictions and issues of being an Arab in a Jewish state.

Eleanor Joseph is a true Israeli Patriot, she sings the Israeli national anthem Hatikvah, and feels proud and excited to see the Israeli flag fluttering in the wind – “it’s always windy during military ceremonies,” she says with a smile. “I don’t have any other country” is a line from the well known Israeli song written by one of the most esteemed poets, Ehud Manor and is also Eleanor’s motto. This line was written for her by her commander and she keeps it in her pocketbook – it’s always with her. Eleanor doesn’t have any other country; she is a true and a proud Arab Christian Israeli.

Al Arabiya has a lengthy and flabbergasted Arabic article on Jozef. When asked if she would kill Arabs if necessary, she answered that she would hardly be the first Arab to kill other Arabs.

She also said that while she doesn’t celebrate Yom Ha’atzmaut, she doesn’t sit and cry either.

Isn’t there a contradiction between singing HaTikvah which speaks of the hope of 2000 years that Jews return to Zion and yet not celebrating Israeli Independence.  Logically, it should be the other way round, no?

Such are the contradictions and issues of loyalty or nationhood if you are an Arab Israeli.  The sub-text of “I don’t have any other country” is, surely, one of resignation and making the best of it. This further implies that she doesn’t feel that, ultimately, this is her country or at least, her choice of country.

Or maybe it’s just that her enthusiasm for Israel and the IDF has to be tempered in the context of her ethnicity and the history of Israel with its contradictory narratives of expulsion and redemption.

But compare with the UK. Muslims serving in Afghanistan are proud to be British and serving their country whilst some of their co-religionists consider them to be sell-out pariahs.

Is there really much difference?

Let’s hope Elinor is the first of many Israeli-Arab women to show their pride in their country by serving as paratroopers.