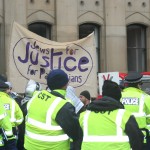 A couple of months ago I decided to start posting on the Jewish Chronicle (JC) Blogs.

I didn’t realise what I was about to discover; what I did discover was something of a revelation.

I don’t just post articles, I participate in the discussions which arise out of the majority of posts.

When I first arrived I landed in the middle of what I call the Blog Wars. Despite this being the JC, the blogs are open to anyone provided that they stick to some obvious rules. The blogs and their comments are moderated and it is not unknown for comments to be removed or even for bloggers or commenters to be banned.

What most surprised me was that I soon found there are two main camps: pro-Israel/Zionist and anti-Israel/Zionist. There are also one or two neutrals.

Almost every blog post can be the catalyst for some right old ding-dongs between these two camps. It’s a sort of Jewish version of the Guardian’s CiF (Comment is Free).

I actually found this very interesting, not only could I see how the ‘other side’ thinks, I could also challenge them,  be challenged by them, argue with them, but never, of course, persuade them. This is an excellent training and test ground to hone your own arguments, to make sure of your facts and sharpen your own polemics.

It is also, at least for me, as a bit of an old lefty, an opportunity to question your own views and convictions in the light of the counter arguments. But, I can honestly say, this self-examination has not fundamentally changed my views, but it has reinforced my commitment to balance and to avoid dogmatism.

Both sides in these Blog Wars tend to be unyielding, entrenched and assured of their own righteousness. Little quarter is given. Israel is rarely criticised by the Zios and the anti-Zios will continue to sympathise with Hamas and Hizbollah.

By far the most revealing of the anti-Zios is a certain representative of Jews for Justice for Palestinians (JfjfP). I am not going to name names here; go and read the blogs; it’s unfair to mention any individual here who is unlikely to respond in person and I’m not going to discuss or reproduce the comments that have appeared in the JC. I’ll simply summarise what these discussions ‘below the line’ reveal.

The JfjfP representative is polite and seems to try very hard to be poised and restrained. JfjfP are part of the left wing bloc that organises demonstrations for Palestinians and Palestine and against Israel and Zionism.

This particular JfjfP member claims she is not anti-Israel and recognises Israel’s right to exist (well thanks).  She is, however, of the opinion that Israel is a colonialist experiment, that the Occupation is illegal and cruelly prosecuted, that Hamas are understandable freedom fighters, that it is Israel and Israel alone and its policies which are the cause of the conflict; if only Israel would seek peace, negotiate with Hamas and the PA, this peace would magically materialise and 100 years of strife would dissipate into thin air, no-one would attack Jews anymore and her ideal, presumably Marxist, certainly Socialist, state would rise, phoenix-like, from the ashes of Israel.

In other words, socialist ideology colours her opinion of Israel which is demonised in her mind to the extent that it can never be right, can never be lawful, because it is an illegitimate state in the first place. And because of this ideological blindness she, like so many others on the far left, be it George Galloway, Alexei Sayle, Tony Benn, Gerald Kaufman and, indeed, a number of post-Zionist Israelis who take the same stance, she is prepared to overlook the anti-Semitism, the homophobia, the misogyny, the Islamofascist death culture of Hamas and its fellow travellers; for her, their charters are just pieces of paper and they can be persuaded to make peace and forswear their previous acts and deeds and policies and bigotry.

Thus the far left supports representatives of the most dangerous, religio-political movement of our times: fundamentalist Islam. They do this in the name of their own socialist vision of the world and history.

The level of self-delusion, double-think and self-deception involved in this world view is astonishing and frightening. It is anti-democratic, anti-liberal, anti-Enlightenment and it makes a pact with the real devil by demonising an imperfect state – Israel.

I am not saying that we Zionists and pro-Israel supporters never take an ‘Israel can do no wrong’ position. It does happen and it happens more when Israel is under mortal threat. What room is there for any self-criticism when your opponents are relentless in theirs. Yet I can never ever find the ‘other side’ critical of the Palestinians and their supporters. It’s as if they are perfect, blameless, beyond criticism because if they do anything wrong the Zionists forced them to do it. At the same time, I do find a very lively debate in the Israeli press and the Jewish World.

There is a big difference between fair criticism and an agenda of demonisation and delegitimisation.

It is very sad indeed to encounter Jews who see history only through a socialist or Marxist prism, even if it means contributing to the efforts of those who would destroy Israel and kill all Jews and, therefore, the very Jews who now support them.

I wonder why some Jews who claim to uphold true Jewish values through sympathy and justice for Palestinians must also simultaneously join in with the chorus of the demonisers of their own people.

I’m currently reading Howard Jacobson’s latest novel, The Finkler Question, I found a very apt and devastating paragraph which amusingly describes Jews who give succour to their would-be destroyers. In the book there is a group not too dissimilar from JfjfP called ASHamed Jews:

To be an ASHamed Jew did not require that you had been knowingly Jewish all your life. Indeed, one among them only found out he was Jewish at all in the course of making a television programme in which he was confronted on camera with who he really was. In the final frame of the film he was disclosed weeping before a memorial in Auschwitz to dead ancestors who until that moment he had never known he’d had. ‘It could explain where I get my comic genius from,’ he told an interviewer for a newspaper, though by then he had renegotiated his new allegiance. Born a Jew on Monday, he had signed up to be an ASHamed Jew by Wednesday and was seen chanting ‘We are all Hezbollah’ outside the Israeli Embassy on the following Sunday.*

Israel-Palestine, Other, The Delegitimisation of Israel