*Readers’ warning: some of these tales have been ever so slightly embellished for comic effect.

Well, this is a first for me: blogging from my succah.

Succot is just about my favourite festival. To any outsider the rituals of Succot (or Succos if you like) seem strange to say the least and give rise to many an amusing incident.

If you are not familiar with the festival please see the information at the end of this blog. 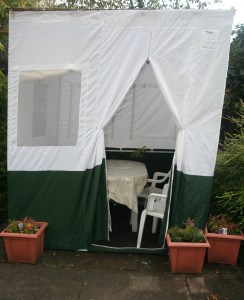 Succahs take many shapes and forms. Ours, as you can see on the right, is made of a metal frame and canvas walls with the roof made from bamboo slats. Other building and roofing materials are available.

A succah is a temporary dwelling but some people have permanent structures which are used for other purposes during the rest of the year. One such structure is my rabbi’s garden shed:

The Tale of the Rabbi’s Succah

My rabbi’s succah is a converted garden shed which can seat a surprising number of people. The roof has been specially adapted so that, using a cantilevered pulley system, it splits in two like the Space Shuttle’s payload bay and is then tied down to reveal the ‘schach’, the roof covering, which is straw thatch but must be sufficiently ‘porous’ to allow starlight to penetrate.

Some years ago, with the succah roof fully opened to a clear autumnal sky, the rabbi’s doorbell rang.

On opening the front door both the bell-ringer and the rabbi were surprised. The bell-ringer was not expecting a tall dark figure with a flowing beard, and the rabbi was confronted by a complete stranger rather than the half-expected visitation of a member of his congregation.

“Good evening,” said the bell-ringer, unfazed, “can I have look through your telescope?”

The Tale of the Succah and the Blitz

A good friend of mine tells me that his grandparents lived in the East End during the War. As observant Jews they would always build a succah for the Succot festival.

One night, the Jews of the East End, along with everyone else, had to take shelter in a different sort of temporary dwelling: the London Underground.

They lay huddled in a tunnel listening to the now all too familiar sound of the percussion of bombs and the shuddering of the ground above their heads.

Nothing could prepare them for the sight which met them on returning to ground level after the all-clear sirens.

Amidst burning rubble lay the ruins of their house.

Only one object was left standing: the funny little hut with its slatted roof.

My friend’s grandfather’s succah had survived the Blitz

The Tale of the Succah as a political symbol

As I look out into the garden I have noticed that everyday my succah is leaning further and further to the right. The gradient of the garden and the prevailing winds play havoc with its stability.

Is the succah like me I wonder? Am I, too, inclining further to the Right as I get older, buffeted by the prevailing winds of the new political orthodoxy and succumbing to the slippery slope of Neo-Con thinking? Am I gradually losing all contact with my socialist upbringing?

Then I enter the succah and look out. From this viewpoint my succah is leaning to the left.

So I guess the list of a succah depends on where you are standing, just like a political viewpoint, all is relative to the person doing the looking.

The Tale of the Succah Crawls

In years gone by it was a tradition in the community that between the morning service and mincha in the afternoon we would congregate at the rabbi’s succah and then plot a course through the neighbourhood visiting each others’ succah.

Each succah owner, or rather the wife of each owner, would prepare a little feast of pop, biscuits, fruit and cake. The group of itinerant succah crawlers would be accompanied by children who would be asked to make the correct blessing on each type of food whilst the men (and women) would each have a ‘l’chaim’ or two and enjoy a chat.

As the crawl proceeded, rather like its non-Jewish inspiration, the ‘pub crawl’, the ‘crawlers’ became increasingly convivial as the toll of whiskies, kosher liqueurs and assorted alcoholic beverages whose provenance could often be traced to the duty-free shops of Ben Gurion Airport, took their inevitable effect.

The orderly grouping of sober men and children in sober suits and sober winter coats ended up as a raggle-taggle loud assortment of observant Jews at various stages of inebriation.

When they finally descended upon the synagogue in time for mincha (afternoon service) I’m not sure that they (we) were in a suitably appropriate condition that met the prerequisites of halacha (law) for davening (prayer).

The Tale of the Succah that didn’t make it

Succot falls at the beginning of Autumn, more or less. The Jewish calendar is a lunar one and that means that the date varies from year to year in terms of the solar calendar.

On the whole, here in Northern England, succot heralds the advent of darker and colder days.

If you have a standalone succah like ours, unlike the succah which was the hero of the Blitz, it is very much at the mercy of the elements. It is not designed to resist extreme weather; the ‘roof” is particularly susceptible to collapse, made as it is from a few wooden planks and bamboo slats.

We used to have a wooden succah which I would assemble and then disassemble every year. We actually had a plastic cover for the roof to keep the rain out when we weren’t inside it. This cover could, under the right conditions, act like a hot air balloon or drogue chute.

One morning, after a particularly blustery night we discovered the plastic sheet draped across the fence and the succah itself had apparently ‘walked’ or flown a few metres across the garden threatening to end up in a neighbour’s back yard. The wooden beams had fallen inside along with the bamboo and a wall.

One can imagine the scene as the succah took flight like Grandpa Potts outhouse in Chitty Chitty Bang Bang (or should that be Me Ol’ Bamboo?) or Dorothy’s house in the Wizard of Oz.

What must the neighbours have thought? Which leads me to:

What Do the Neighbours Think?

Succot is the time of year when we are most visibly Jewish in a non-Jewish country.

I often wonder what the neighbours make of the annual succah building, the strange night time meals when we parade into the succah wearing heavy coats and reappear immediately to wring out sodden towels used for drying chairs.

Then, long after we have returned to the house, the candles turn our seven foot square booth into a huge Chinese lantern well into the night.

Then there is the morning where we can be observed taking out our strange leaves and palm frond and a yellow citrus fruit the likes of which you never see in Tesco, then shaking them, popping them back into their receptacles and proceeding as if nothing completely weird just happened.

These days I carry my lulav in a transparent plastic sleeve. Not long ago the container was a metre-long cardboard box. As the men made their way to the synagogue with this long box in one hand a little box in the other (for the etrog) I fancifully wondered if our neighbours might rename our festival Snookot, as it would appear to the uninitiated that this was the season of the Annual Jewish Snooker Contest.

The festival has two main symbols, the Succah and the Arba Minim (the Four Species or Lulav and Etrog).

The latter relates to the festival’s origins as a fruit harvest festival, one of the three ‘Foot Festivals’ or pilgrimages which took place at the Temple in Jerusalem.

The former is a commemoration of the temporary ‘booths’ in which the Children of Israel dwelt during their sojourn in the wilderness on their way to the Land of Israel.

At the end of the festival we also celebrate the completion and, therefore, the beginning of the annual cycle of weekly Torah reading with Simchat Torah, the Rejoicing of the Law.

Every year for the last 15 years or so I have built a succah in my garden and every year I buy my lulav and etrog. 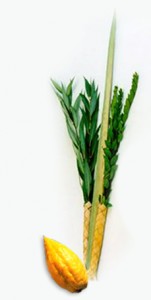 You can see what they look like on the right. We have to make a blessing on the lulav every day, except Shabbat, and in the synagogue we have special prayers during which the lulav is shaken in all directions of the compass and up and down and paraded around the synagogue in procession.

At the end of the festival on Hoshana Rabba willow branches are beaten against the ground, symbolic of the threshing of our sins. This links Succot to Rosh Hashana and Yom Kippur as the day on which our fate for the year is finally delivered.

Thus the many symbols and the interweaving of many themes linking Succot, Hashana Rabba, Simchat Torah and also Rosh Hashana and Yom Kippur is a very beautiful, joyous and poetic time of the year.

When you live in Northern England very few years go by where you can sit in your succah everyday. If Rosh Hoshana often brings an Indian Summer, as it did this year, then Succot is sure to bring rain and cold and damp. After all, this festival was designed for a late Israeli summer not a British Autumn.

This year, so far, has been good. We have been able to spend a lot of time in the succah. But as I write, the sky is greying and the temperature is dropping. If it becomes too uncomfortable to be in the succah then you can come back into the comfort of your regular home.

In warm climates you are obliged to do everything you would do in your home, including, according to some authorities, sleep, in your succah, as well as entertaining and working.

It’s hard to describe the experience of living in a succah but it seems to stir some atavistic instincts which, like camping, recall some embedded memories of cave dwelling and times before central-heating and flat-screen TV’s.