The lies they tell at St.James’s Church, Piccadilly, London 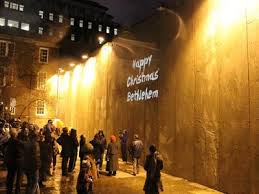 Yasser Arafat defied the Christian tradition in Bethlehem, which had been respected and upheld under Israeli authority, by appointing a Muslim governor and engineered a Muslim takeover of the city council. He then put his stamp on this town by converting the Greek Orthodox monastery, next to the Church of the Nativity, into his official Bethlehem residence.

At great risk to his life, Pastor Naim Khoury, of the Bethlehem Baptists Church, exposed the developing threats to Christians within the territories controlled by the Palestinian Authority. “People are always telling Christians to convert to Islam.”
His ministry is based on love and non-violence. He is also a strong advocate for Zionism based on God’s land covenant with Israel through Abraham.
Because of his views, his church has been bombed fourteen times, and he has been shot three times. He has been threatened by the Palestinian Authority to close the doors of his church which they consider as “illegitimate.”

This brave Christian priest needs and deserves the active support of church leaders worldwide. Instead, they boycott him and pick on Israel for their wrath, ignoring the human rights crimes of the Palestinian leadership whom they openly support. How twisted is that?

Elias Freij, the Christian mayor of Bethlehem at the time of the Oslo Accords in 1993, warned Israeli Prime Minister, Yizhak Rabin, to maintain control over his town. “Bethlehem will become a town of churches devoid of Christians if you transfer control to the Palestinian Authority.”
Israel caved in to international pressure, handed over Bethlehem to the Palestinian Authority and, for the middle class Christian residents, their lives became threatened, and the mayor’s warning became the current Christian nightmare.

The St. James’s Church Christmas charade failed to mention the fear that pervades the shrinking Christian population. The fear of attack by Muslim Palestinians is personified by Joseph Canawati whose sister, her husband, and three children have fled to America.
“I want to leave but nobody will buy my business. I feel trapped. We are isolated,” he complained.

But the Piccadilly church leaders turn a deaf ear to his plea, or to the fear of death at the hands of non-Christian Palestinians in Bethlehem, such as that felt by Jeriez Moussa Amaro whose two sisters, Rada aged 24 and Dunya aged 18, were gunned down by Palestinian Muslims in their own home. Their crime was to be young, attractive, and wear Western clothes and no veil.

Sami Qumsieh, the general manager of “The Nativity,” the only Christian television station in Bethlehem, has received death threats and visits from armed gunmen. He is now ready to leave.
“As Christians, we have no future here.”

How sad it is that this church, the British Methodist Church, and many other Christian leaders are blindsided in their pursuit of a perceived Jewish enemy that they fail to come to the rescue, or campaign for, their co-religionists, persecuted by those who they actively and expensively support.

Israel and Accusations of Racism and Apartheid, Israel-Palestine, The Delegitimisation of Israel