My connection to the Duke of Wellington 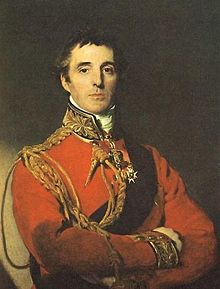 On this momentous anniversary of the greatest battle in European history, I thought I’d go a little off-piste and tell you a personal story.

My late father was a gentleman’s hairdresser in Maddox Street, Mayfair in London during the 1960s and into the 1970s.

Being near to both Regent Street and Piccadilly, where the BBC’s Paris studios were located on Lower Regent Street, he had a celebrity clientele. The clientele not only included media stars, well-known names from television, the radio and the cinema, but also one or two members of the aristocracy.

One of these was the Duke of Wellington. Not the current Duke, of course, but his father, the 8th Duke. However, His Grace did not pop into the salon like everyone else (including a Prince of Siam),  my father had to go to Apsley House to cut the Duke’s hair.

One can only imagine how the little Jewish man from the West End must have felt the first time he showed up with his bag at Number One, London and, no doubt, marvelled at the splendours within.

At least, I have always assumed it was Apsley House and not Stratfield Saye. By the 1960’s the house had belonged to the nation for over a decade but the Wellesleys still occupied apartments. I’m pretty sure my father would not have travelled all the way to Berkshire or be required to do so.

On one occasion, he told me, he arrived at the house and the Duke’s butler directed him to a side entrance. When ushered into the Duke’s presence he somehow knew the direction from which my father had come. He glowered at his butler, who had confirmed that my father had been told to use the tradesman’s entrance, and rebuked him, ‘Mr Cook comes through the front door!’

I should also add the Duke was four years younger than my father and in a few days time it will be the 8th duke’s centenary.

This story would always fill me with some pride that the Duke regarded my father above the station of a tradesman and was embarrassed to have him treated so rudely. On reflection, and I know this was 50 years ago, it was a rather patronising attempt at conferring some measure of status on my humble, scissors-wielding father. Nevertheless, His Grace was most gracious on that occasion and I thank him for it. The fact that I often tell the story shows that I am proud of the association, however slight, with such a great name. Even though I know the first Duke was no philo-semite, and regarded our people with a certain disdain, I can’t help admiring the old goat.

The 8th Duke would send notes to the salon ordering toiletries. Here’s his autographed request for just such an item, sent from Stratfield Saye in 1967, in case you think I am fibbing. 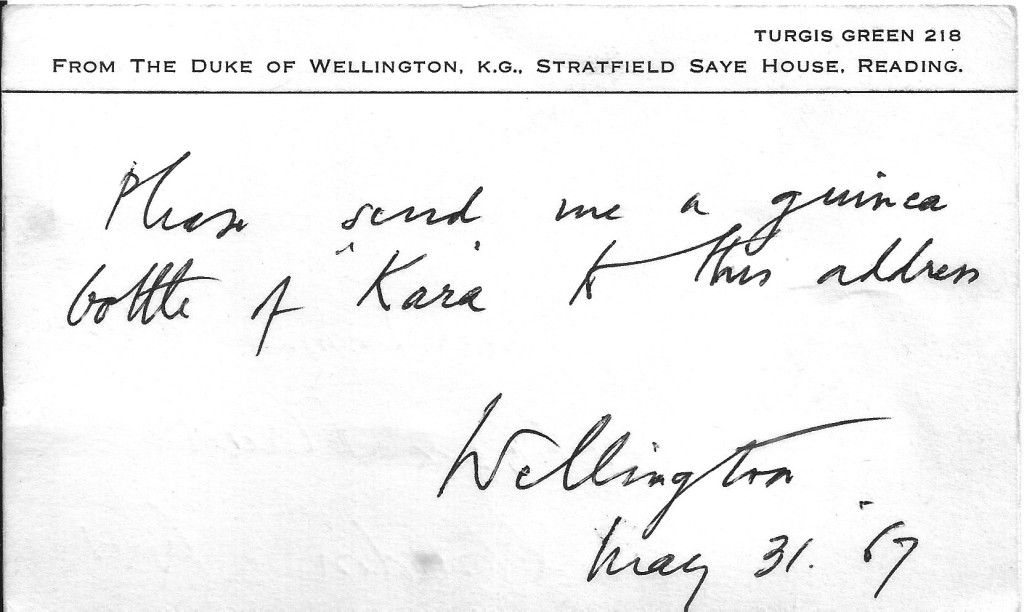 ‘Please send me a guinea bottle of “Kara” to this address

I have no idea what “Kara” was but it seems the Duke thought it worth sending a postcard for it from his country seat.

The Battle of Waterloo is a seminal moment in European history where a mainly German army led by an Irishman defeated a Frenchman from an Italian heritage – but only just; had it not been for the timely arrival of the Prussians – more Germans – under Blücher.  Strange thing, history.

I recommend that you watch the BBC documentary ‘The Scots at Waterloo’ which gives a vivid portrayal of what it was like to take part in the battle. It’s on iPlayer for a while yet. Hundred of books have been written about Waterloo but one I have recently read takes you through the day hour by hour and transports you to the Regency period in a way few history books achieve – ‘Went the Day Well?: Witnessing Waterloo’ by David Crane.